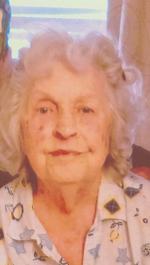 
Tommie Gambrell Roye passed away, Tuesday, March 10, 2020 in Cleburne. She was born March 19, 1925 in Cleburne to Isaac and Gertrude (Bales) Gambrell. She married Herbert Williams Roye on September 3, 1947 in Cleburne. Before retiring Tommie was a machine operator for Walls Industries. She was life long baptist.