To share your memory on the wall of Sidney Johnson, sign in using one of the following options:

Sidney Johnson passed away Tuesday, April 14, 2020 in Fort Worth.
He was born May 14, 1935 in Granbury to Edgar and Minnie Ola (Stewart) Johnson. Sidney married Ruby Janelle Burgess on June 29, 1955 in Cleburne. He was a locomotive engineer with 40 years of service for Santa Fe Railroad. Sidney was a member of Lebanon Baptist Church and Elks Lodge.

Sidney is survived by his children, Randall Johnson and wife Dorsey of Granbury, Regina Carroll and husband Carl of Cleburne and Kris Johnson of Burleson; 6 grandchildren; 19 great-grandchildren and 3 great-great- grandchildren.

Sidney is preceded in death by his parents; wife, Janelle Johnson on June 7, 2014 and brothers, Lecil, J.C., Murlin, O’Neal and an infant brother.
Read Less

To send flowers to the family or plant a tree in memory of Sidney Johnson, please visit our Heartfelt Sympathies Store.

Receive notifications about information and event scheduling for Sidney

We encourage you to share your most beloved memories of Sidney here, so that the family and other loved ones can always see it. You can upload cherished photographs, or share your favorite stories, and can even comment on those shared by others. 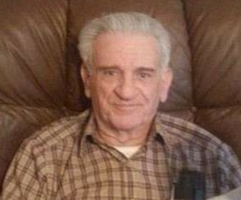