To share your memory on the wall of Sharron Wilder, sign in using one of the following options:

Print
Services for Sharron Boyett Wilder, 76, of Burleson, will be held Saturday, February 8, 2020 at 1:00pm at Pathway Church in Burleson, TX located at 325 NW Renfro St.

She worked as a bookkeeper at Shenandoah Oil Company, which later became KellOil, Inc, for over 20 years and then moved on to Texas Contractor Supplies before retiring in 2001. She enjoyed gardening, cooking and being with her granddaughters. But we all knew her real passion was for her dogs.

She will be greatly missed.
Read Less

To send flowers to the family or plant a tree in memory of Sharron Joye Wilder (Boyett), please visit our Heartfelt Sympathies Store.

Receive notifications about information and event scheduling for Sharron

We encourage you to share your most beloved memories of Sharron here, so that the family and other loved ones can always see it. You can upload cherished photographs, or share your favorite stories, and can even comment on those shared by others.

Posted Feb 03, 2020 at 11:05pm
As much as your mom enjoyed life, we feel like she would be blessed knowing she contributed a tree to bring life and be life in the forest. Hugs! 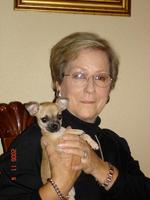