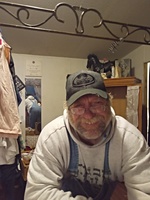 
Robert worked as an oil blender for 15 years with Red Giant. Robert had a rough exterior but had a soft interior. He will be missed by everyone.