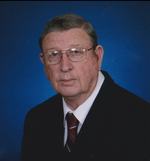 Memorial service for Robert Gray, 81, of Cleburne, will be conducted at10:00 A.M., Tuesday, October 27, 2020 in the Crosier-Pearson Cleburne Chapel. Reverend Charles Payne will officiate.

Robert Gray passed away Thursday, October 22, 2020 in Cleburne. He was born January 13, 1939 in Covington to Raymond Joseph and Geneva (Gilliam) Gray. Robert married Sue Reid on June 14, 2002 in Fredericksburg. He was a sheet metal worker for Santa Fe Railroad with 43 years of service and a member of Calvary Baptist Church.

He married Beverly Siratt in 1963. From this union three children were born. Beverly passed away in 2000.

Memorial may be made to Calvary Baptist Church Youth Department 700 Woodard Ave., Cleburne, Texas 76033.
The service can be viewed on You Tube by going to the Crosier-Pearson Cleburne page.