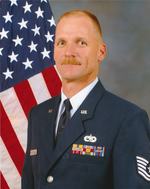 Services for TSGT Randall K. Baldwin, USAF (Ret.), 56, of Cleburne, will be conducted Tuesday, October 29, 2019 at 10:00 A.M., in the Calvary Baptist Church. Reverend Charles Payne and Reverend Brooks Monk will officiate. Burial will follow at 2:00 P.M., in the DFW National Cemetery. Visitation will be from 6:00-8:00 P.M., Monday at the funeral home. Pallbearers will be John Stewart, Mike Shannon, Jon Stark, Aaron Roberts, Bryan Procktor and Ron Dickey. Honorary pallbearers will be Citizen on Patrol and his military family.

Randy passed away Monday, October 21, 2019 in Cleburne. He was born May 16, 1963 in Long Beach, California to Melvin Lee and Helen Louise (Copeland) Baldwin. He married Yvonne Lynn Ellis in Parker on March 20, 1994. He retired from the U.S. Air Force, where he was a B52 Flying Crew Chief, after 24 years of service. He was an active member of Calvary Baptist Church.

He was preceded in death by his father, Melvin Lee Baldwin and brother, Les Baldwin.

Memorials may be made to the Air Force Aid Society at www.afas.org or the Multiple Myeloma Foundation at www.myeloma.org.