To share your memory on the wall of Lloyd Harper, sign in using one of the following options:

Provide comfort for the family of Lloyd Harper with a meaningful gesture of sympathy.


Lloyd is preceded in death by his parents and wife Betty Harper in 2015.
Read Less

We encourage you to share your most beloved memories of Lloyd here, so that the family and other loved ones can always see it. You can upload cherished photographs, or share your favorite stories, and can even comment on those shared by others.

Ernie and Shae McCauley sent flowers to the family of Lloyd Harper.
Show you care by sending flowers

Ernie and Shae McCauley purchased the The FTD Comfort Planter for the family of Lloyd Harper. Send Flowers

Posted Jan 09, 2020 at 06:27pm
R.I.P. Uncle Loyd🙏☝✝ ❤
Thank you for your Sacrifice and Service to our Country⚓🗽🇺🇸
Thank you for being an Uncle that I could look up to. So many memories, Great memories and Family time's that we grew up with and Loved! You will be Soo missed by us All that are left behind.. But knowing the day will come that we All reunite in our HEAVENLY HOME WITH OUR HEAVENLY FATHER AND FAMILY ❤🙏☝✝
ALWAY'S IN OUR HEART'S/ FOREVER ON OUR MIND'S
ALWAY'S LOVED 💘/ NEVER FORGOTTEN😢
🇺🇸SAFE RIDES🙏☝✝👍⚓🇺🇸
Comment Share
Share via: 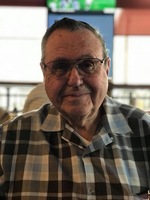