To share your memory on the wall of Ken Peters, sign in using one of the following options:

Provide comfort for the family of Ken Peters with a meaningful gesture of sympathy.

Ken was born in Allentown, Pa in 1933 but grew up in Alliance, OH., with his family running the Naborhood Inn. Peters served in the U.S. Air Force during the Korean War era and proudly continued his service as a member of The American Legion for 41 continuous years. He served as Cleburne’s American Legion Post 50 Commander 2000 – 2002 and as Lake Granbury American Legion Post 491 Commander 2006 - 2008 in addition to many District, Division and Department offices and committees. He paid tribute to his father’s WWI service through his membership in the Sons of the American Legion Squadron 50 in Cleburne.

He portrayed Santa Claus for veterans, elderly and children. Ken dressed as Uncle Sam and participated in Flag Education programs at local child care centers and East Cleburne Community Center. He was so very proud of his family.

After a short period of factory work, he went into business for himself, beginning a lifetime of entrepreneurship. He continued his family tradition of tavern owner. The clubs he owned and operated from the 60s forward were The Mountaineer, Pirates Cave, Century Room, Tippy’s Lounge, Kenneys Club in downtown Fort Worth and opened the Woodworks on Park Place. His careers included managing a clothing store in both Dallas and Fort Worth, crop-dusting, moving and selling mobile homes, paving & striping; installing septic systems; storm cellar sales; commercial rentals; owned both a chicken restaurant in Fort Worth and La Casa Mexican Restaurant in Cleburne and the Granbury Riverboat in Granbury.
He built and managed three mobile home parks in Johnson County: Ranch Oaks, Mountainaire and Sunset Mobile Home Park; Colonel Ken Peters was an auctioneer since 1964;

Ken never met a stranger and was always in the center of fun and laughter. He also loved fishing, airplanes & flying, traveling and sharing time with his family and friends. He will be greatly missed by so many people with whom he became unforgettable.

He was pre-deceased by his parents and his mother-in-law Tensie Hinson. He survived his very good childhood friends: Joe and Miriam Shuck and Tom Burkhart and George Crawford.

The family wishes to extend their deep thanks to Christine Sigler, caregiver during his last weeks, Mission Hospice and Renew Home Health.
Those wishing to donate rather than send flowers are asked to select a dementia/Alzheimer’s organization or prostate cancer research center of their choice.
Read Less

To send flowers to the family or plant a tree in memory of Ken Peters, please visit our Heartfelt Sympathies Store.

Receive notifications about information and event scheduling for Ken

We encourage you to share your most beloved memories of Ken here, so that the family and other loved ones can always see it. You can upload cherished photographs, or share your favorite stories, and can even comment on those shared by others.

James Harris sent flowers to the family of Ken Peters.
Show you care by sending flowers

Posted Feb 28, 2020 at 12:39pm
sure going to miss my friend ken we had some fun times and interesting conversations over many breakfasts and running the roads condolences to marty, ken jr and family he is surely going to be missed
Comment Share
Share via:
LG 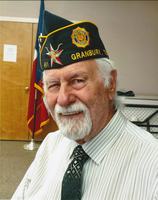