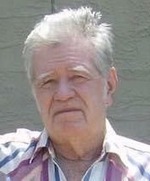 Graveside service for John R. Summerlin, 89, of Paris, TX, will be conducted at 2:00 P.M., Saturday, May 1, 2021 in Bethany Cemetery with Reverend Nick Hamilton officiating. Visitation will be Friday, April 30, 2021, from 6-8:00 P.M., at the funeral home. Honorary pallbearers will be Raymond Flow, Buck Mitchell, Danny Mitchell, Kevin Summerlin and Cliff Summerlin.

John R. Summerlin passed away April 25, 2021 in Paris, TX. He was born June 19, 1931 in Egan, TX to Cliffel Alton and Mavis Louise (Harrison) Summerlin. John held a bachelor’s degree and served in the U.S. Navy from 1949-1954. He retired as a reserve police captain in Fort Worth after 30 years of service. John also worked as an engineer for AT&T Telecommunications before retiring after 38 years. John married his first wife, Virginia Raye Summerlin on January 28, 1951 in Odessa, TX and after her passing he married his second wife Eva Lee Summerlin in the summer of 1992 in Palo Pinto County, TX. John was the ultimate caretaker. He took care of everyone. He was dedicated and loyal, not only to his family and friends but also to everything he did. John was an artist (oil paintings), a published author, leather craftsman and taxidermist. He enjoyed hunting and fishing as well. John’s most loved time was spent with his grandchildren and great grandchildren, who called him “Pop”. Music was a big part of his life, having known and played with Elvis and Willie Nelson before they were even famous. John was a member of Masonic Lodge and a member of Cahill United Methodist Church.