To share your memory on the wall of James Brown, sign in using one of the following options:

Provide comfort for the family of James Brown with a meaningful gesture of sympathy.

James Henry “Hammer” Brown passed away Tuesday, February 11, 2020 in Fort Worth. He was born August 12, 1947 in Cleburne to Henry and Arizona (Caldwell) Brown. James worked over 38 years for the Santa Fe Railroad and was a veteran of the U.S. Army. He was a member of the First Mount Zion Missionary Baptist Church.

To send flowers to the family or plant a tree in memory of James Henry "Hammer" Brown, please visit our Heartfelt Sympathies Store.

Receive notifications about information and event scheduling for James 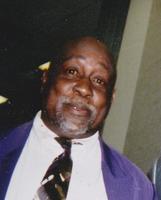