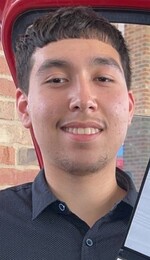 Funeral services for Isidro Natera, Jr., 18, of Cleburne and Forest Hill, Texas, will be held at 2:00 P.M., on Saturday, April 2, 2022, in the Crosier-Pearson Cleburne Funeral Home Chapel. Pastor Carlos Diaz will officiate. Interment will follow in the Rosehill Cemetery, Cleburne with Pastor Hector Salinas officiating. There will be a time of visitation held from 6:00-8:00 P.M., on Friday, April 1, 2022, in the funeral home chapel.

Isidro Natera, Jr. passed away Saturday night, March 26, 2022, in Cleburne from injuries received in an automobile accident. He was born to Isidro Natera, Sr., and Jenny Ponce on January 22, 2004, in Cleburne. Junior worked at the Wal-Mart Distribution Center in Cleburne. He was known as being quiet and quirky, having his own special kind of humor. He had a big heart and cared for his loved ones greatly. It was important to him to be successful in all he did. Junior spent countless hours working out at home or boxing at his grandfather’s home. He also enjoyed fishing, gaming, cruising, and spending time hanging out with his friends and family. Becoming a father was the highlight of his life and the time he spent with his son was priceless. His memory will live on through those he leaves behind and will be missed greatly.