To share your memory on the wall of Geraldine Van Zandt Glenn, sign in using one of the following options:

Jerry was born in Hill County, Texas to Ona Bell Bullard Van Zandt and Onan Jasper Van Zandt in 1923. After graduating from Blum High School, she went to work at the Yale Theater in Cleburne where she noticed a handsome young man hanging around the box office when she sold tickets. She married that young man, Morgan Key, in 1944. He went into the military later that year and returned home from the war in 1946. They moved to Corpus Christi, Texas, where she worked for Southwestern Bell Telephone Company for 32 years. During her time with SW Bell, she received numerous promotions and retired as a supervisor. They were blessed with a son, Roby Key, in 1947.

She and Morgan retired in 1983 and moved back to Cleburne to be closer to family. They were longtime members of West Church of Christ in Cleburne and she was active in several bridge clubs. Morgan passed away there in 1991. She later married Jay Shoemaker in 1992 and was married to him until he passed away in 2000.

Love found her again when she was set up with Carl Glenn by his sister, Fina. She and Carl were married in 2005 and had a wonderful time together until his death in 2011.

Jerry moved from Cleburne to The Westmore Retirement Center and later lived with Roby and his wife Sherry near Azle, Texas, where she spent many days looking at deer and petting her beloved dachshund, Lucy.

Jerry is survived by one son, Dr. Roby V. Key and his wife Sherry; grandchildren, Randy Key (Lindsay) of Dallas, Jennifer Key Lyons (Carter) of North Richland Hills; and step-grandson, Matthew Jackson (Jamie) of Houston; and six great-grandchildren. Two step-daughters, Margaret Glenn Mechinus (Joe) of San Antonio and Jan Glenn Valecka (Bob) of Lewisville; and one step-daughter-in-law Violetta Glenn of Beach City, also survive her. Jerry was preceded in death by her parents, her three husbands, and her siblings, George Van Zandt, Ernestine Roye, and Doris Lyne. She is survived by one brother, O.J. Van Zandt (Luberta) of Midlothian.

In addition to those above, she will be missed by Shelley, Edith and Suzanne, her caregivers and Lucy, her little dog.

In lieu of flowers, the family suggests you donate to your favorite charity.
Read Less

To send flowers to the family or plant a tree in memory of Geraldine "Jerry" Van Zandt Glenn, please visit our Heartfelt Sympathies Store.

Receive notifications about information and event scheduling for Geraldine

We encourage you to share your most beloved memories of Geraldine here, so that the family and other loved ones can always see it. You can upload cherished photographs, or share your favorite stories, and can even comment on those shared by others.

Posted May 27, 2020 at 09:27am
Dear Key Family, Our deepest condolences during this time. Love, Cynthia and Miguel Reyes

Posted May 26, 2020 at 05:28pm
We are all thinking of you during this difficult time. With heartfelt condolences,

Posted May 25, 2020 at 07:21am
We both enjoyed knowing Jerry. Please accept our condolences for you loss. 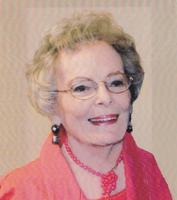