To share your memory on the wall of Gene Burchfield, sign in using one of the following options:

These phrases have been used to describe Gene Ray Burchfield. For a boy who grew up in poverty during the 1930s and 1940s, Gene accomplished more than anyone could have fathomed. He struck out on his own from Ardmore, Oklahoma to California then to Texas to fulfill the dream of a better life. From Dairy Queen worker and bowling pin setter to international businessman, he made it!

Gene used his natural love of communication to tell stories and sell products in the business world. The products changed over the years but his presence and confidence never did. The only thing that paused his business career climb was the years he served our country in the US Army where he continued to learn, grow, and develop his life story. He was a friend to a few faithful soldiers for the remainder of his life.

Back at THE FARM, Gene was the “farmer” who was often seen wearing his Florishems while feeding the cows and goats. He was the breeder of multiple World Champion American Paint Horses. He was a builder of fences, mower of the fields, and doer of many “HoneyDos.” But most importantly to Gene, he was the husband of almost 63 years to Bobbie. He was the father to Mike, Mark, and Mendy who were given so many gems of wisdom under his guidance. He was the very proud GRANDfather to the six luckiest grandchildren in the world who grew up knowing that their grandfather would do whatever it took to make them happy and feel loved. He was the Great Grandfather to four.

All those who really knew Gene Burchfield could tell you he was usually the wisest person in any room he entered but he did not try to let others know it. He was not prideful or arrogant, except maybe when it came to his grandchildren. If any of them were in the room, he would always try to make them feel like they were the smartest in the room. He was so proud of each of them for their own accomplishments.

All those who knew Gene Burchfield from the nursing home staff to brothers and sisters in Oklahoma to daughters-in-law to cafe owners of establishments he frequented and to everyone in between could say, this Storyteller made them feel important and able to do anything life put before them. He worked to lighten the load of others around him if he could and he refused to be a burden even at the time of his death.

Pop will be missed more than any words can describe but his family will continue to tell stories about him for the rest of their lives to keep the old laughing, keep the young inspired, and help keep his memory alive for a very long time. As a Christian, you can be confident you will see him again at the Gates of Heaven ready to tell you all about what there is to see.
Read Less

To send flowers to the family or plant a tree in memory of Gene Ray Burchfield, please visit our Heartfelt Sympathies Store.

Receive notifications about information and event scheduling for Gene

There are no events scheduled. You can still show your support by sending flowers directly to the family, or planting a memorial tree in memory of Gene Ray Burchfield.
Visit the Heartfelt Sympathies Store

We encourage you to share your most beloved memories of Gene here, so that the family and other loved ones can always see it. You can upload cherished photographs, or share your favorite stories, and can even comment on those shared by others. 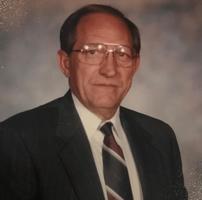