To share your memory on the wall of Charles Magby, sign in using one of the following options:


Charles Magby was born November 27, 1933 in Maypearl, Texas to LeRoy and Alverta Belle (Alexander) Magby. He married Delores “Dee” Tarver who preceded him in death October 23, 2010. Charles served in the U.S. Navy. He was a retired mechanic from Bell Helicopter. After retiring from Bell Charles worked for Albertson in Burlesons, Texas. Where he made lots of friends just by putting groceries in their vehicles. He was always so cheerful. Charles would make friends with everyone. Those who knew him considered him to be a loving, friendly and Christian man who never met a stranger.

Survivors include his brother, Donald Magby and wife Betty; granddaughter, Kimberly Baxter; great-grandchildren, Matthew, and Eddy; numerous niece, nephews and their families. Special thanks to his great niece Wendy Bates and friend Marcy Beam for all his extra care.
He was also preceded in death by his wife, daughter, Judy Magby; parents; brothers, James Magby and Edward Magby; and great-grandson Joseph “ JoJo” Byers.
Read Less

To send flowers to the family or plant a tree in memory of Charles Edger Magby, please visit our Heartfelt Sympathies Store.

We encourage you to share your most beloved memories of Charles here, so that the family and other loved ones can always see it. You can upload cherished photographs, or share your favorite stories, and can even comment on those shared by others.

Posted Jan 25, 2020 at 08:52am
Charles, I've known you for about 20 years. You never overreacted. Always rolled with whatever punches life threw at you. "Steady Eddie" comes to mind. There is peace in knowing you've been reunited with your wife and daughter and that you're no longer lonely. You'll be missed. Love you
Comment Share
Share via:
LT

Posted Jan 23, 2020 at 07:27pm
Charlie,
I've only known you for 3 short years and your not suppose to be gone already.But I know ur in a better place now.I know ur so happy to finally be with ur wife and daughter.So fly high sweet Charles.Im so gonna miss you.
Comment Share
Share via:
DP

Posted Jan 23, 2020 at 07:24pm
My beloved husband, Clayton grew up with Charley and always said he was a very honest man and a great friend. Clayton and Charley both worked and retired from Bell Helicopter, Charley retiring first. After Clayton retired and was on oxygen, he would ride to the grocery store with me and sat in the car waiting for Charley to bring someone's groceries to their car then Charley would drop by our car and visit with Clayton until I came out and he could put my groceries in our car. They had so much fun talking about their younger days. After Clayton passed away, Charley would always take my groceries out and place them in my car. He was such a great friend and loved by all who knew him. I know he and Clayton are sitting up in Heaven talking about all their good times as children and working at Bell Helicopter. RIP Charley. Druesilla Pool 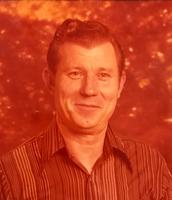