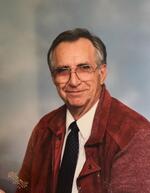 Charles Edward “Dad” Carpenter, also known in his hometown as “Sonny”, went to be with the Lord on December 30, 2020 in Fort Worth, Texas. Charles was born in Omaha, Texas on October 8, 1928, to Charlie A. Carpenter and Clara Ledbetter Carpenter. He attended Ward School thru Junior College, in 1949, with the same friends in Paris, Texas.
In 1950, Charles was drafted into the US Army. As a cook, he took his duty seriously and remaining proud of his military service until his death. With a smile his family will say, when he cooked at home, it seemed like it was for an “Army”. Shipped to Korea in 1950, he took part in several notable battles, Old Baldy, Hill 347, and Hill 343. When given time off from active duty, he would sometimes spend it with a USO Group entertaining troops. After his service ended in 1952, Charles attended school in Fort Worth where he met and married Frances Turner on March 3, 1955. They moved to Burleson, Texas in 1960. He worked as a Supermarket Manager from 1969 until his retirement. After retiring, he worked part time for Bransom’s Market in Burleson. Charles devoted his spare time serving as a deacon, playing guitar and singing in the choir and praise team, and assisting in any way he could in church business. For many years, he and his family members have traveled to Oklahoma City to attend the 45th Infantry Reunion to renew old friendships with his army buddies. This was one of his favorite times.
Charles is survived by Wife of 65 Years, Frances of Burleson; sons, Charles Blake and wife Susan of Crowley; James Stephen and wife Connie of Euless; daughter, Chelsa Kelley and husband Steven of Benbrook; 7 grandchildren; 12 great grandchildren; sister Gladys Watson of College Station; numerous nieces, nephews, and friends.
Go Rest High on That Mountain Dear One.