To share your memory on the wall of Billie Jo Richards, sign in using one of the following options:

Billie Jo worked for 47 years at Williamson-Dickies in Fort Worth in Customer Service, Sales and Marketing. Traveling the world was a passion and she especially loved traveling with family or friends to New York City and Jamaica. Billie Jo had a desire for connecting with other strong women and made friends in book clubs, networking groups, an investment club, a western writers group, AA and Alanon, many times a leader and always a loyal member. She considered it a mission to promote women in the business world and was a mentor to many. Forward thinking for her generation, she generously supported many causes such as Planned Parenthood and the Southern Poverty Law Center.

Billie Jo (JoJo) will be remembered for her steadfastness, generosity and cheerfulness. She was a truly authentic person who believed that everything happened for a reason and worked out for the best in the end.

Donations in memory of Billie Jo and her love of reading can be made to the Burleson Public Library at this website. Burlesontx.com/211/friends-of-the-library
Read Less

To send flowers to the family or plant a tree in memory of Billie Jo Richards, please visit our Heartfelt Sympathies Store.

Receive notifications about information and event scheduling for Billie Jo

There are no events scheduled. You can still show your support by sending flowers directly to the family, or planting a memorial tree in memory of Billie Jo Richards.
Visit the Heartfelt Sympathies Store

We encourage you to share your most beloved memories of Billie Jo here, so that the family and other loved ones can always see it. You can upload cherished photographs, or share your favorite stories, and can even comment on those shared by others.

Zachary, Suzanne, and Wesley and Jim, Sharon and Bonnie Newland sent flowers to the family of Billie Jo Richards.
Show you care by sending flowers

Posted Jul 23, 2020 at 07:20pm
Same as Angela, your laugh was one I will always remember. The memories of going to Jamaica with you momma and Sissy. The time I got lost in the store and was in tears. You came running for me when they paged you. Thanksgiving dinners at your house in Burleson and then Granbury.
I will always appreciate everything you did for me and the kids for so many years.
You are with Momma and Sissy now, y’all can have a lot of dinners together now.
Love you.
Your Niece, Jessica Hall (Benson)
Comment Share
Share via:
AG

I just wanted to let you know how much I am going to miss you. I remember all the good times we spent at your house in Burleson. Those memories are some of the best ones I have of you. Your laugh...I always loved your laugh. It always made me smile to hear you laugh. You were always loving, gentle, kind, and such a joy to be around. I wish I would have done a better job keeping in touch with you when I became an adult. Right now, the one thing that makes me feel better is the fact that you are with Mom now. I know she is so happy to see you, and I am sure you are happy to see Sissy. I love you Aunt Jo.

Posted Jul 23, 2020 at 10:40am
Carolyn, Kathy, and Cheryl, Jojo was an incredible woman that we were lucky to have in our lives. Loving her and you during this difficult time..

Zachary, Suzanne, and Wesley purchased the The FTD Comfort Planter for the family of Billie Jo Richards. Send Flowers

Posted Jul 21, 2020 at 11:01pm
Carolyn and Vance so sorry for the loss of your Mother and Mother-in-law......Thinking of you and your Family.....
Prayers,
Donna Palmer
Comment Share
Share via:
JN 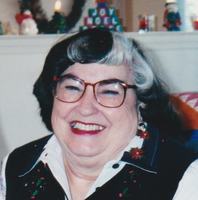