We're sorry but the candle you have selected is currenty in the process of being purchased or has just recently been purchased.

Please feel free to select another candle or check back in 15 minutes to see if the candle you have selected has been released for purchase.

We're sorry but there are no candles available for lighting.

You have already begun a candle purchase session. If you would like to continue with your current candle choice please click "Continue" otherwise please click "Select Another".

In Memory of
Jerry Stephen
Brand
1950 - 2018
Click above to light a memorial candle.

The lighting of a Memorial Candle not only provides a gesture of sympathy and support to the immediate family during their time of need but also provides the gift of extending the Book of Memories for future generations.

In the event that there is an error
in the information presented,
please contact the funeral
home by clicking here. 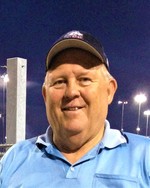 Jerry S. Brand, of Cleburne, TX, left his earthly playing field for the last time on Tuesday, May 15, 2018 at the age of 67.
A Celebration of Life will be held on Thursday, May 24, 2018 at 5:00 pm, The Depot, Cleburne Railroaders Stadium (Conductor’s Club), 1906 Brazzle Blvd, Cleburne, TX 76033. This will be an informal gathering and those who wish to wear their officiating attire or jersey in honor of Jerry are encouraged to do so.
Jerry was born to parents George and Lura Belle Brand on July 6, 1950. After graduating from Cleburne High School, he continued his education at UNT. He held numerous teaching, coaching and administrative positions throughout the years and most recently retired from Venus ISD after 30 years of service. Although retiring from Education, he continued mentoring and influencing young people as a sports official, Pony director, and held multiple leadership positions with TASO Volleyball. He received numerous awards and acknowledgements throughout the years, but “Pop’s” most valued achievement is the values and principles he has instilled in so many young people’s lives.
Jerry was reunited in heaven with his parents, his brother Mike Brand, his daughter Brooke Cogburn and his grandson Parker Thresher.
He is survived by his wife Earline Brand, children: Bryant Hamilton and wife Machelle, Jenny Rodriguez and husband Aaron, Bridget Brand, Emily Brown and husband Martin, Adam Thresher and wife Stephanie and many loving grandchildren and great grandchildren.


To send flowers to the family of Jerry Stephen Brand, please visit our Heartfelt Sympathies Store.

This Book of Memories brings those affected by loss together by encouraging communication and self-expression. By giving friends and family a special place to tell their stories and express their feelings of loss, it helps them care for one another during a very difficult time. Click on any of the links to the right to access features or information within this memorial website.